I recently had an opportunity to promote my side business with a banner ad. For several reasons—mostly procrastination—I made a banner ad that was ugly as sin and went against all common sense…

Then it worked better than ever expected, and it saved my side business.

Continue reading for the short story, followed by lessons you can apply to improve your own conversion rates.

In addition to helping companies with user acquisition, I run GagCartoons.com. It’s a site that lets cartoonists monetize their unpublished single-panel cartoons, and helps companies find funny cartoons to use instead of boring stock photos.

As with most marketplace services, I faced the chicken-and-egg problem. I needed to recruit cartoonists (sellers) to have something to sell, and companies (buyers) to license those cartoons and validate the business model.

Trying to solve both problems at once was getting increasingly difficult,  and my perseverance was beginning to wane.

The Daily Cartoonist is a blog about the cartooning industry. After supporting their Kickstarter campaign, I got a voucher for one week of display advertising on their site. I was in no hurry to use the voucher, because I had several “common sense” assumptions about display ads:

Tired of seeing the voucher on my to-do list, I finally scheduled a week in which to run the ad. The low expectation led me to procrastinate until the night before to start working on the banners. Short on time, I got desperate and began questioning my “common sense” about display ads…

With nothing to lose and low expectations, I made these two banners—shown here as the visitors saw them: 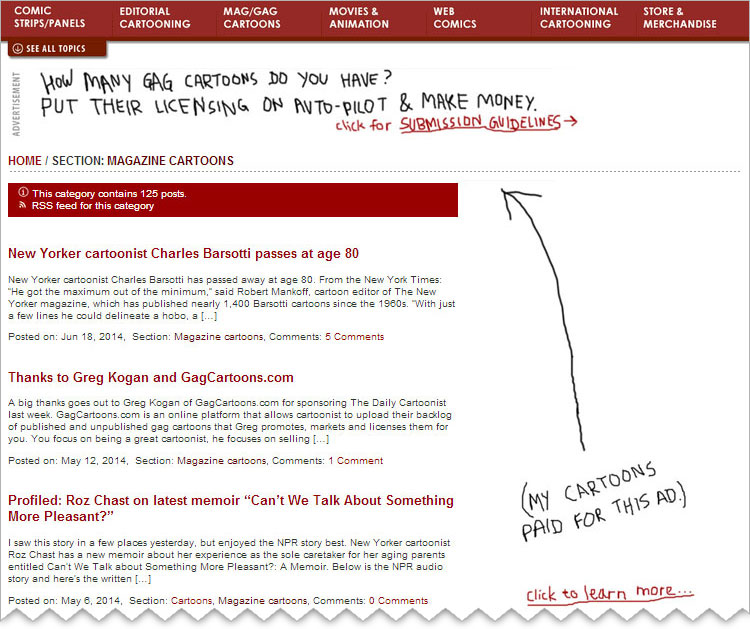 (I also quickly typed up a landing page for the ad. The page simply explained the value proposition and encouraged cartoonists to email me to become a contributor.)

The chicken-and-egg problem is now partially solved, because there’s now a large cartoon inventory relating to many topics. This lets me focus on the other half of the market: businesses and content creators.

More importantly, I learned that testing common assumptions can result in uncommon results.

Have you been doing something just because it’s common sense? Test something different, even if it’s ugly.